One of the most unique islands in Greece, a true architectural marvel in the Saronic Gulf, beautifully preserved and just a few hours away from Athens.

The stone old captain mansions amphitheatrically built around the small picturesque harbor give special character to this small island, where no cars are allowed and the only means of transport are water taxis, caiques and donkeys! The architectural décor of the once flourishing maritime city of the early 19th century has been preserved intact, and is now an idyllic backdrop for romantic holidays. Hydra has been a favorite of the international jet set for many decades. The yachts and sailboats that come and go with their celebrity passengers recall something of the cosmopolitan climate of the late ’50s and ’60s, when Sophia Loren made the island world famous with “The Boy and the Dolphin” and turned it into a summer must.

In the cafés and bars in the harbour with the iconic clock tower you can stop for breakfast or cocktails, while there are nice restaurants and traditional tavernas in the beautiful little piazzas, courtyards draped in bougainvillaea and atmospheric terraces. Don’t miss the traditional hand-made almond sweets

Concept boutiques and art & jewelry shops present emerging Greek talents, while every summer world-class contemporary artists showcase their works in exhibitions like the ones organised by DESTE foundation in their Old Slaughtery venue. It is no accident that so many artists and art lovers have bought houses on Ydra.

The first stop on their sightseeing programme can be the Ydra Historical Archives and Museum, which has a collection of artefacts from the Greek Revolution and occasionally houses exhibitions of paintings and engravings. Up the hill and we come to the mansions of Pavlos and Lazaros Kountouriotis, standing proudly above the harbour and now open to the public as museums, their high-ceilinged rooms displaying the wealth and splendour of late 18th / early 19th century Ydra.

From the harbour caiques and water taxis depart regularly for beaches accessed better or only by sea, like Vlychos or more remoted Bisti and Agios Nikolaos, with their combination of fine shingle and shady pines, umbrellas and snack bars. Another local ritual is diving off the rocks at the edge of the harbour, below the popular beach bars, or at Kaminia beach accessed on foot, where you will also find nice tavernas and beach bar. 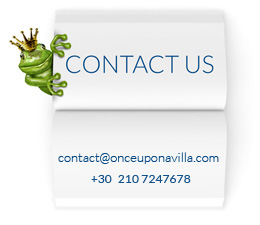 Villas for Rent in Hydra